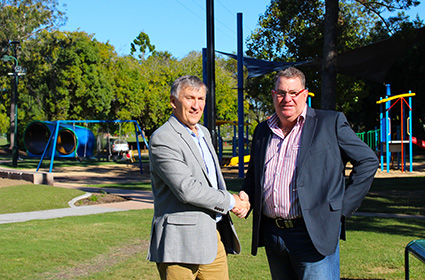 "This is a significant investment into the Beaudesert township and will bring economic activity to the Scenic Rim.

"Under round four of the Building Better Regions Fund (BBRF), we are providing a significant cash injection of nearly $4.2 million to support the region's economy.

"The Scenic Rim has been hit very hard by drought. Under this round of the BBRF we've specifically targeted funding to drought regions.

"While we cannot make it rain, we can encourage economic activity in our region, in our town and promote employment.

"Council has identified a priority project for the region and our Liberal National Government is getting on with supporting projects in drought hit regional Australia.

Mayor of the Scenic Rim Regional Council, Greg Christensen welcomed the funding and thanked Scott Buchholz and the Australian Government.

"These funds announced today will cover almost half the project costs, with the Queensland Government covering $3.75 million under its Building our Regions program.

"This is a huge windfall for the Scenic Rim as we now have the ability to transform the heart of Beaudesert into an engaging town centre at minimal cost to our ratepayers.

"There's a lot of competition nationally for this grant money, so we are thankful to have been successful in this round, and look forward to delivering a new town centre for Beaudesert that people across the region can come and enjoy.

"In addition, Council has also received $38,500 to deliver a Smart Region Strategy, which will help grow our economy through digital innovation.

"There are so many opportunities to deliver services more efficiently and improve our community's lifestyle, and to have a clear direction on how we can achieve that is critical to future growth."

Mr Buchholz said while rainfall wasn't on the radar as often as we all wished for, investment in the region was flowing.

"What we have seen as a result of drought, bushfires and coronavirus, is less economic activity.

"Funding for this project will go a long way towards building confidence and creating jobs and local procurement in a region that needs it.

"As we look to the recovery from these events, grass-roots projects will be important in rebooting our local economy," Mr Buchholz said.