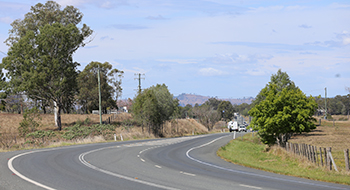 1 October: Commitment to a strategic Mount Lindesay Highway is a key driver of Scenic Rim Regional Council's 10 Point Advocacy Plan in the lead up to the State General Election.

Commitment to a strategic Mount Lindesay Highway is a key driver of Scenic Rim Regional Council's 10 Point Advocacy Plan in the lead up to the State General Election.

"In their own SEQ Regional Plan, the Government talks about the realignment of the Mount Lindesay Highway through the 15,000-hectare Bromelton State Development Area to improve connections with South East Queensland markets and provide efficiencies in freight movement," he said.

“It’s now time to turn that talk into a commitment for the benefit not only of the Scenic Rim, but for the whole South East Queensland economy.”

Bevan Richardson, Transport Manager for Neilsens Holdings Pty Ltd said the Mount Lindesay Highway traffic problems were an issue for the company, which operates two quarries at Bromelton and Cryna as well as its Beaudesert Concrete Plant.

"On average, we despatch 800 loads per month between 6:00am and 8:00am travelling north on the Mount Lindesay Highway between Beaudesert and Jimboomba," he said.

"The trucks experience delays on this route varying from 15 minutes to 25 minutes per load, which increases our cost due to traffic congestion of $0.54 per tonne or $37,300 per month.

"This additional cartage cost is a competitive disadvantage in the marketplace and is the difference between winning and losing a contract.

"Over a 12-month period, this is a considerable cost, and as a Queensland owned business investing in Beaudesert, we would appreciate seeing some forward thinking that would allow for future efficiencies."

Cr Christensen said what industry needs is the commitment to a three-stage and strategic process, which would support efficient logistic movements and economic growth.

"Firstly, we need a commitment to upgrade the Mount Lindesay Highway, so that it can be a high-performing dual carriageway from Beaudesert to Browns Plains," he said.

"The additional signalised intersections and reduced speed zones that have been implemented over recent years benefits local traffic, however it is inefficient for loaded heavy vehicles to stop and start.

"The second part is to design the previously identified arterial bypass from Woodhill through Bromelton, and then out to Josephville, and finally the third piece is the construction.

"We've heard a lot of talk from Queensland Governments in the past, but now it's time for action to support the intended goals of the Bromelton State Development Area to grow local jobs and the broader economy."

The Ten Point Plan is available on Council's website www.scenicrim.qld.gov.au/our-council/administration/advocacy