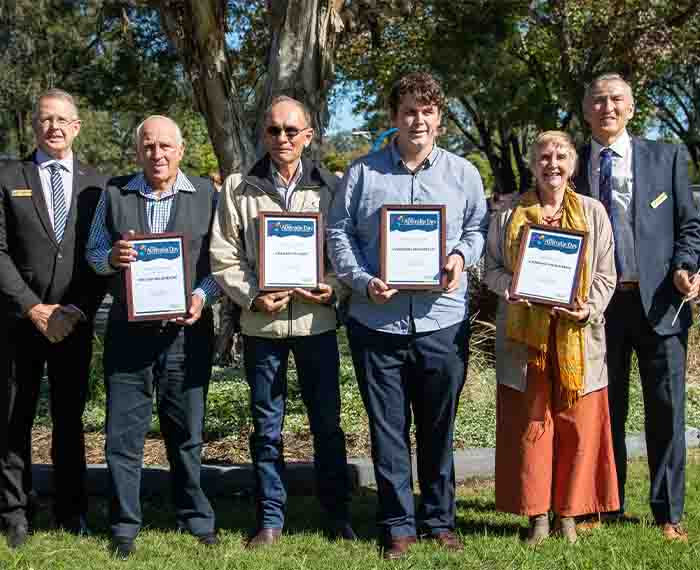 A school celebration, which brought people from across Queensland back to the Scenic Rim, and individuals who represent vital threads in the social fabric of their community were recognised in Council's 2022 Australia Day Awards yesterday.

The Australia Day Awards presentation, which was postponed in January due to COVID-19, was held in conjunction with a citizenship ceremony and Scenic Rim region’s Queensland Day celebrations held in Jubilee Park, Beaudesert, on Sunday 5 June.

"I would like to acknowledge and congratulate each of this year's nominees for their outstanding achievements," he said.

"While there can be only one winner in each category, everyone who was nominated is, in their own way, a winner, a community champion, who makes a positive contribution to our Scenic Rim lifestyle.

"My sincere thanks to everyone who contributed to yesterday’s celebration by nominating those community members considered well worthy of recognition."

Judged the most outstanding community event of 2021, Peak Crossing State School's 150th anniversary on 4 September welcomed 1500 guests from across Queensland, including a 100-year-old past pupil, Joan Bradshaw, and brought the school and wider community together in celebration of the achievements of students, teachers and volunteers.

Scenic Rim's Citizen of the Year (16 to 30 years) was Cameron Mansfield, whose involvement with the Canungra Owls began as a six-year-old in the Under 11s team, which won the soccer club’s first-ever grand final.

Since taking on the role of Club President in 2020, Cameron has inspired others to step up and volunteer. Leading by example, he has brought older members back to the club and brought new members into the fold.

Graham Stumer's more than 37 years of service with the State Emergency Services (SES) Boonah Group was recognised with the award of Citizen of the Year (31 to 65 years).

Now the Deputy Local Controller, he is highly regarded for his strength of character and dedication. He is also a member of the Boonah Show Society, Fassifern Shooting Club, Lutheran Church and volunteers his time to assist with the maintenance of the Templin Historical Village.

Citizen of the Year (65+ years) was Wilson Neuendorf who, although well in his 80s, continues to work for the Boonah, Kalbar and wider Scenic Rim communities.

The Mayor's Award was presented to Barbara Proudman, who toured Europe with a United Kingdom-based dance troupe before moving to Tamborine Mountain, where she ran the Tamborine Mountain Dance School from 1986 to 2001.

Since 2001, she has been the owner and manager of the Tamborine Times newspaper and has been a keen supporter of the arts, festivals and community events including ANZAC Day and Remembrance Day commemorations.

"Once again, all of this year's nominees were of an extremely high calibre, making it a tough decision to choose just one winner," Mayor Christensen said.

“Their example of service to the community - whether through local service organisations or sporting groups, or simply by being ready to lend a helping hand to others in need - should be an inspiration to us all.

"Many have worked year-round over many decades, and often in challenging circumstances, to make a positive difference to community life.

"It is their outstanding contribution that makes our region such a great place to live and raise a family."